Hello, and welcome back to Guidance! For three long weeks we’ve been discussing how to go about designing something for your Pathfinder or Starfinder game that fills in gaps in the system. We’ve been looking at the armored solarian specifically, and after determining there is a noticeable gap in defenses for the armor solarian, designing the fundamental framework for a new type of equipment that is designed to solve the issue, solarian armor crystals, and researching different effects our armor crystal could have, its time to put it all together!

Should It Stay or Should It Go?

When you’re designing anything, one of the questions you need to constantly ask yourself is, “Should this be a thing I keep, or should this be something I get rid of?” In my case, as I looked over the three “basic” effects I had come up with, I decided that I ultimately needed to ditch my original “Doctor Strange” crystal idea. Why? Well, when I stated out the crystal, the initial idea was to make the armor crystal akin to Doctor Strange’s cloak; able to dance about and do things on its own. Specifically, I was thinking of a crystal that let you spend a Reaction to move the solar armor’s enhancement bonus to AC to a nearby ally within 30 feet. That seemed pretty cool and different to me.

However, in practice, that mechanic didn’t work well. It ended up being a “weaker” version of the Core Rulebook’s Bodyguard feat, which is a reaction to use the covering fire action on a nearby ally. I didn’t like how similar it felt, so I dropped the idea. Sometimes that is a thing you need to do as a design—recognize that you can’t keep pouring man hours into a thing that has no value to you as a designer. (This is called the Sunken Cost fallacy, and its a design problem that I want to talk about next week.)

At any rate, my other two ideas—Symmetra Barrier and Orisa Barrier—were still really cool. They were easy to write because I thought they were fun and active. So without further adieu, let’s look at them! 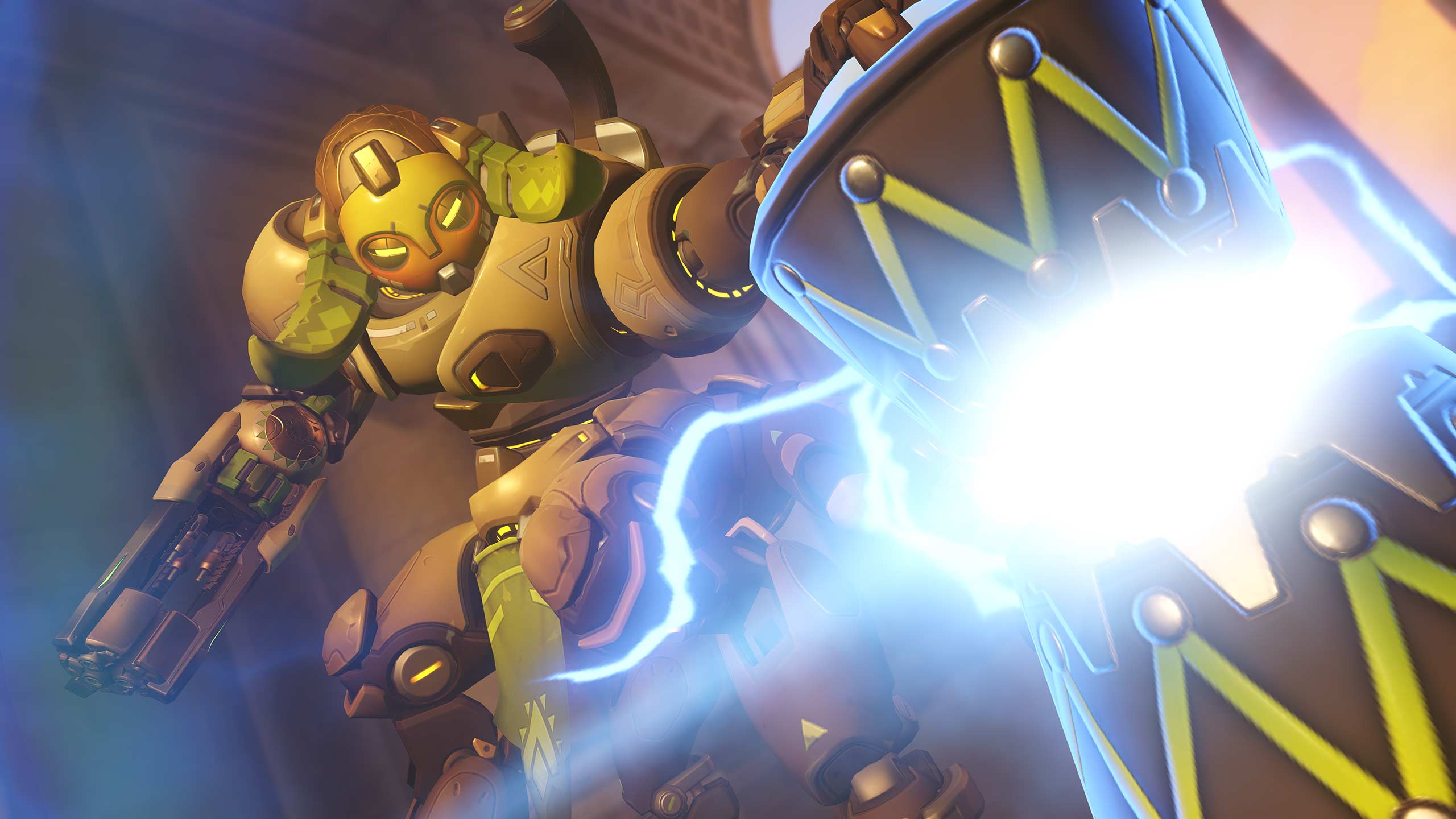 Impenitrite crystals are almost completely opaque and have a metallic sheen. When inserted into a solar mote, an impenitrite crystal allows you to project an immovable barrier at a grid intersection within 10 feet while in graviton mode. You must have line of sight to a grid intersection to place your barrier there. Once formed, a translucent, 10-foot tall barrier extends 10 feet outward from the point of direction in one direction of your choice, as well as 10 feet outward in the opposite direction. The resulting barrier is 20 feet long and 10 feet high as a result, with its center being its point of origin. The barrier is semi-permeable—opponents moving through the barrier requires a successful DC 10 Strength check, and creatures who successfully pass through the barrier take all of the penalties associated with being in a high-gravity environment for 1d4 rounds afterwards. The barrier blocks line of effect for your opponent’s ranged attacks, spells, and spell-like abilities, however, functioning as total cover against such attacks and cover against melee attacks despite being completely translucent. This doesn’t allow creatures to use the barrier to make Stealth checks, however. You and your allies take none of these penalties.

So the idea for this crystal is that you’ll pick a grid intersection and create a barrier there. I wanted to keep the feel that this isn’t a barrier that just prevents movement; you can move and even make melee attacks through it. However, the barrier has some hardness and a respectable-but-not-overwhelming number of hit points. You can even project multiple barriers if you want, but it’ll cost you a LOT of resolve very fast.

One of the design problems that I wanted to solve was, “How do I give a lot of armor crystal options while also allowing PCs to pick and choose favorites that they can keep relevant across the game? My answer to this problem was to allow armor crystals to be made at different item levels, sort of like how you could make scrolls at different caster levels in Pathfinder. This barrier is a neat thing that you can do as early as 1st-level if you have the money for it, and if this is the only armor crystal you want to use, you can always get a higher-level version of it. (This is a design idea that holds true in the other crystals I’ll be showing to you.

Speaking of that, let’s see another!

Lightforged crystals are cut from a unique material that is so clear that it is almost invisible to the naked eye. When inserted into a solar mote, a lightforge crystal grants the solarian the ability to shape light shed by their solar armor into physical—albeit temporary—structures while in photon mode. As a standard action, you choose one grid intersection that is adjacent to your space and create a shimmering barrier of light along two of that grid intersection’s lines. This allows you to create a line-shaped barrier that is 10 feet long and 10 feet high, or an L-shaped barrier that is 10 feet high and whose sides are 5-feet long each. Creatures and objects can pass through the barrier without difficulty, and creatures incur no penalties for making melee attacks through the barrier. The barrier blocks line of effect for your opponent’s ranged attacks, spells, and spell-like abilities, however, functioning as total cover despite being completely translucent. As a result, you can’t use a barrier created by a lightforge crystal to make Stealth checks. This barrier doesn’t block line of effect for your or your allies’ ranged attacks, spells, and spell-like abilities, however.

I REALLY like that I have two types of crystals that use barriers, but use those barriers are very different, the smallest of which being that one is intended for graviton mode and the other for proton. The lightforge crystal’s barrier is smaller, but harder and mobile. There’s also no penalty for moving through it if you’re melee, and you have to rest to use it again once you’ve used it. There’s no paying Resolve Points to use it again. But since its harder, theoretically it’ll last you longer.

Now, it wouldn’t be fair to show you two similar crystals AND cut the different one, would it? So I DID design something completely new and different to show you, and I’mma do it. Because this is MY blog and no one’s tried to shut me down yet for doing crazy things!

There’s a couple things I wanted to note about this one. First, I acknowledged that not every player is going to want to have the super strong utility that the barrier crystals provide. Some people are going to want more selfish protection. This crystal was specifically requested as an option by my friend who’s playing the armored solarian in James’s Dead Suns campaign. She wanted something she could do to feel like her armor was reducing the damage she takes by a little, so I designed this armor crystal to be reminiscent of Pathfinder’s stoneskin spell. One of my favorite parts about this item is how it uses the broken condition as its own personal limiter. Because it transfers your damage to the crystal, and because crystals stop providing their non-AC benefits when they gain the broken condition, this item basically has a point where the DR just stops working, which feels very cinematic to me. (And is a great balancer; can’t have huge amounts of DR at will as a cheap item, after all.)

So, this is basically my personal design process for whenever I make anything new. Whether it’s Ultimate Charisma, the Skill Challenge Handbook, or the Advanced Weapon Training options, I try to identify a need, do my research, look for inspiration, and then design to fit those three criteria. I hope this helps you as you design your own unique items and abilities for your games! If you have more questions about my design process, feel free to leave them in the comments. For now, however, I’m pretty ready to move off this month-long topic and start talking about something new. Specifically, about the Sunken Cost Fallacy and how it relates to RPG design. But until then, I’m Alexander Augunas, the Everyman Gamer, and I’m always here to offer you a little bit of Guidance! Next Article   Code/Switch – Is Magic Powerful, or is Power Just Imitating Magic?