My Medieval Literature professor once told my class that the medieval audiences enjoyed new and innovative retelling of the same tales. As far as I can tell, not much has changed in the last 600+ years. There are dozens of variations on the Beauty and the Beast or Cinderella themes not to mention the sheer number of Arthurian legend versions. Recently I caught up on the new Voltron series, which of course, informed this week’s blog. Warning, if you’re planning to watch Voltron, Legendary Defender on Netflix and you’re not up to Season 4, there are spoilers in this blog, but I’ll try to keep them limited to Season 1. 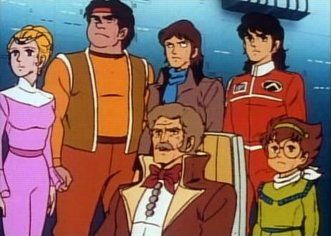 I watched Voltron in the mid 1980’s. I’ll be looking at the Beast King GoLion version of Voltron specifically since the newest version is based on those characters. My brother and I would anxiously await the next episode, we owned both the lion and vehicle sets, and even as adults, we nerd out about how we missed things as children and speculated on how the show was changed in the translation – or lack of translation, since the writers did not translate but rather wrote all new scripts (which leads to my biggest complaint about this and other early anime cross overs – they weren’t translated from Japanese but rather the art was used and edited with whole new scripts crafted based on the images just guessing at the original intent, but back to the blog). This version was very formulaic – the team worked to overcome a roadblock in the greater story arc while the bad guys created a robeast of the week (some kind of robot, magical monster, or combination of both) and sent it after the Voltron team. Half way through the episode Voltron faced the robeast and lost, they had to find a way to overcome their shortfall – which simultaneously helped them solve the story arc roadblock. Ultimately ending with the lions flying in formation to create Voltron, “Form Blazing Sword”, and save the day. Pretty much the formula for every 30 minute show ever (except the blazing sword part). Sometimes the stories focused an individual character, but the Voltron team members were still sadly rather shallow after 5 seasons – or at least that’s how I remember them now, it has been several decades since I last watched this version.

The current version surprised me, I went in expecting fluff and monster of the week, but I got a story about characters who are interesting and much different than I anticipated. 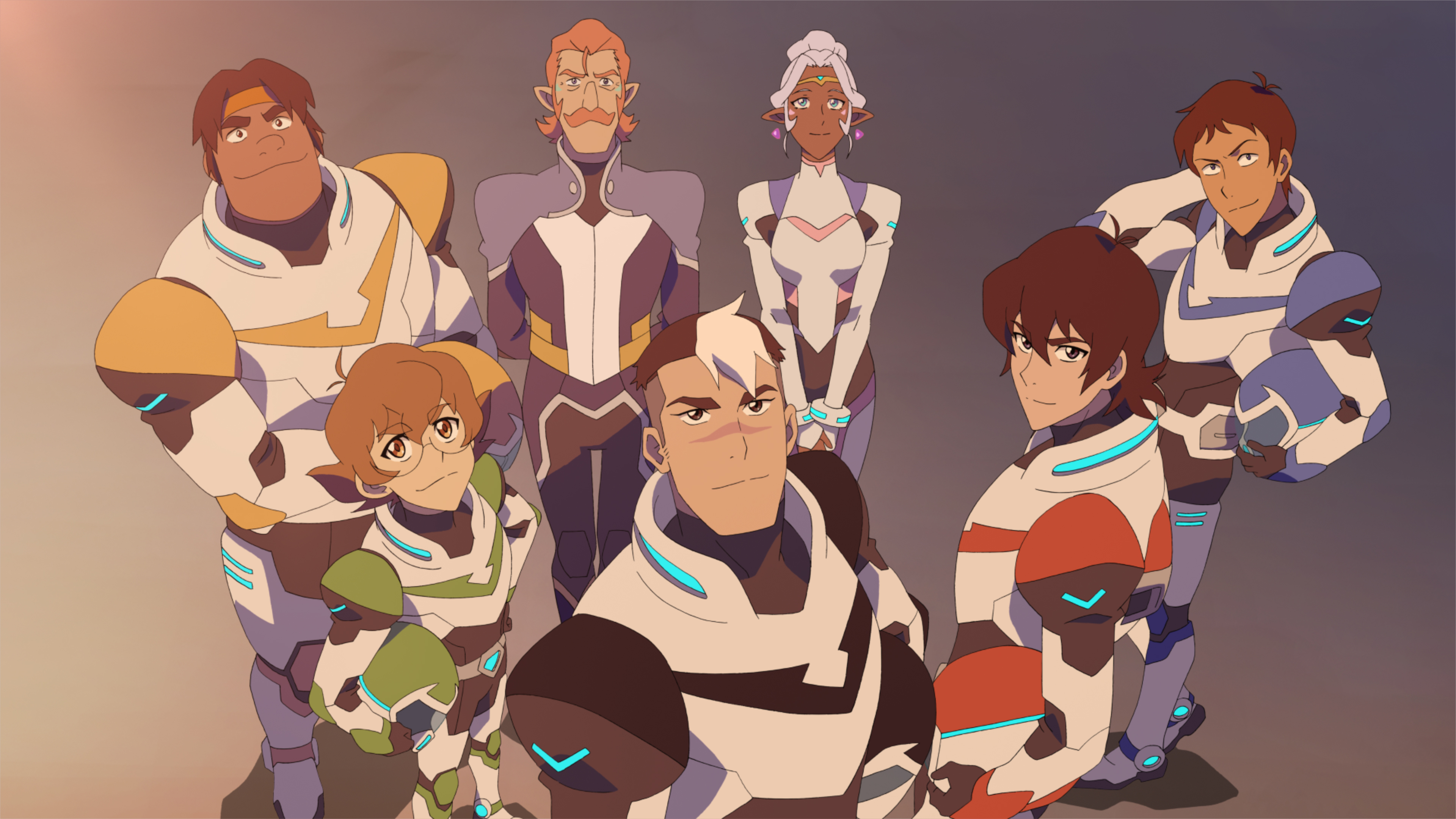 The first big change, and one that I really love, was that they initially seemed to make Pidge transgender (which I even wondered about even back in the 80s). Even now, 4 seasons in, Pidge pings trans or nonbinary to me, because after the original conversations regarding who Pidge is, the show does not use pronouns to identify Pidge and while knowing Pidge’s birth name, it is not the name used. The show even goes so far as to show how Pidge chose their name. Since representation matters, I like to think that Pidge is confident in their identity and that they are clearly accepted and loved by their friends no matter how they identify. This does get cloudy in season 4, but I don’t want to ruin too much for anyone who’s behind. It is worth noting that on DreamWorks’ website, all the Paladin bios use pronouns, except Pidge’s, which remains ambiguous. This was probably meant to obfuscate the revelation of Pidge’s identity, but it hasn’t been updated and I’m sticking with gender fluid of some fashion. Pidge is searching for their brother, which leads to some extended solo screen time in Season 4.

We find out that Keith is part alien (withheld for spoiler reasons) and the series spends quite a bit of time exploring Keith’s other aspects. This lends itself to Keith going off on “solo” adventures without the team and shows a character with other obligations including Voltron. Seeing a character that is torn by who isn’t sure of his place in the universe helps with viewer investment.

Allura is Altean, which didn’t mean much in the original series, she was just some beautiful blonde princess, like all the other beautiful blonde princesses in need of rescuing. Now Allura’s not human but an alien race. The series as a whole has a lot of alien races and Alteans at least appear to have more diverse in skin tone. Sadly still not very many humanoid people of color, but I hope that DreamWorks will step that up some. She’s still a fairly flimsy character, but she’s getting there and as a major focus of the series, I imagine her story will be slow to unfold.

Shiro (formerly Sven) had a make over too. His story is similar in broad strokes, he’s taken out of commission and eventually returns to the Voltron team but there are hints of more of his inner struggle. He’s much less a throw away character and unlike the original series where Sven died and his younger brother – who looked so much like him that the writers just dropped the brother and made him the rescued Sven – just picked up nearly where they left off, Shiro is shaken by his encounter with Zarkon and trying to find his new place in the team.

Hunk and Lance remain pretty 2 dimensional, hopefully they’ll get some more screen time to explore Hunk’s love of culinary arts and big heart, while maybe Lance will be something other than a would be “ladies man” looking for Ms. Right Now – sadly apparently some things never change.

The Lions – they have always had personalities, but this is a more immediate and important part of the story. I don’t want to spoil too much, but the Lions push their paladins in a lot of ways and are more than just mecha, they are mounts and partners with their paladins.

As the show unfolds, we don’t see monster of the episode, there have been numerous episodes where the giant robot never makes an appearance, largely because the team isn’t even together, but often because they don’t have a “big bad” to fight. The stories unfold at a more natural pace, far more similar to how a gaming adventure unfolds.

In the same vein as Avatar: The Last Airbender and The Legend of Korra the newer show dives deep into the lives of the characters. It is the pacing of the new show that I am most taken with, nothing feels rushed. A character has an important piece of story and it gets told until it feels reasonably satisfying, then the next story happens. This means that the seasons are of irregular lengths and come out quickly, by comparison to other show releases. As GMs and players, we can look for opportunities to absorb this kind of pacing into our games.

When using breaking out stories for a single or small group of PCs make sure that everyone at the table is engaged. These short stories need to move the story forward in some manner – perhaps it explains how a PC has gained a new ability or item or how they met an NPC or what they were doing while their player was on deployment/away at college/not available for game. It’s been mentioned here before, but it’s worth saying again, players can play additional NPCs and feel like they’re part of the story, even if it isn’t their story. Telling Player A’s story while the other party members portray NPC family members or old school mates gives everyone a piece of the action without glossing over potentially great stories and plotlines that present themselves.

Looking at how you run your weekly game – which may feel like brief storyline progression popping up between the monster of the week combat – it can get pretty stale after a while, consider punching up the role playing and forgoing a big combat every week to allow for some organic storytelling to guide your players to the next big storyline milestone. This is a great opportunity to flesh out some of those backgrounds the players have lovingly provided their GM way back in session 0 and it provides players with the opportunity to explore their PCs inside the setting, not just isolated inside their minds. Often times table top can feel a lot like those early 23 minute episodes of Voltron, that’s when you need to figure out how to tell the same story a different way, to realize it’s a good time to shine a little spot light on on your players’ PC creations. A little spotlight goes a long way, try to show everyone some center stage time.